Gala Dinner at the Round House in Camden 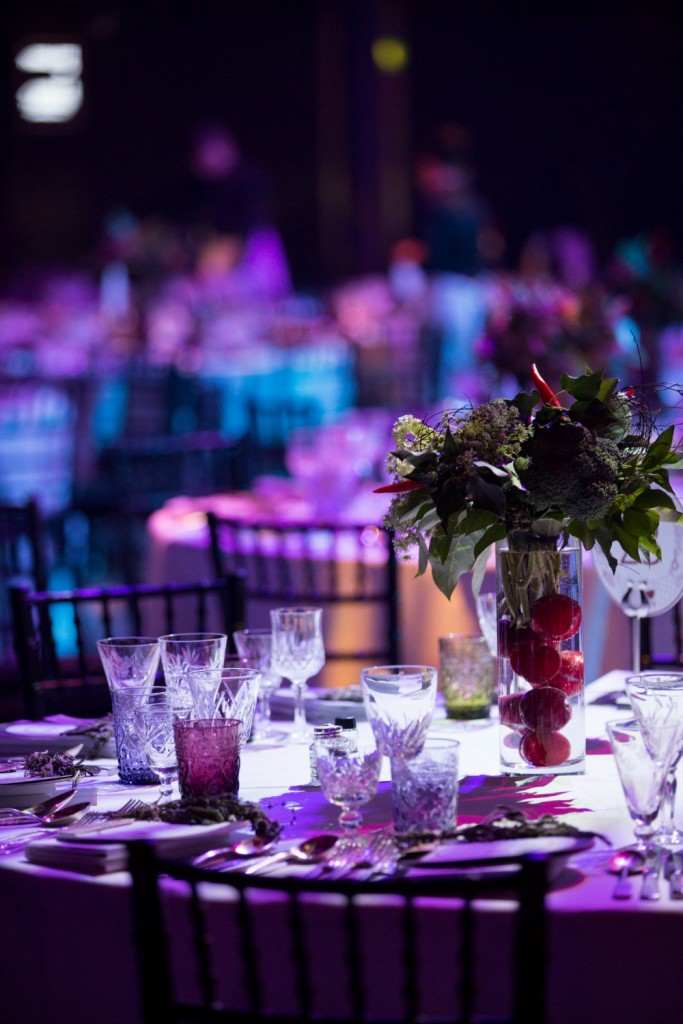 Today I am rewinding back to the beginning of the year, February to be precise when we had the pleasure of creating centre pieces for a gala dinner at the round house in Camden. Hard to believe looking back that it was ten months ago when we were contacted by the lovely Fiona from The Bank who were working on a gala dinner event which was for a cooking awards ceremony. Little did I know at the time that this event was being hosted by celebrity chef, Paul Hollywood all you Great British Bake Off fans will know exactly who he is, those of you who don’t, well there’s always google! The events team were keen to incorporate food into the centre piece designs to tie in with the cooking theme. We filled glass cylinder vases with plums & the designs on top were made up of broccoli’s and chillies mixed with ammi, guelder rose, berried ivy, sala leaves and twigs. The arrangements were made up as handties (for those of you not familiar with my terminology this is the floristry technique used to create bouquets) and I must highlight that this was very tricky indeed! Have you ever tried holding two broccoli’s with one hand (bearing in mine I have tiny hands too!) probably not as it’s not something you do every day & if you do you have left me intrigued and would love to know why! Anyway I am digressing, the stems were actually too thick to hold & maneuver at the same time whilst trying to add the other ingredients so we came up with the rather clever (if I do say so myself) idea of staking one of the broccoli’s making then easier to manage when constructing the arrangements.

A little bit different I know, but then again you know we like to be a bit unique! The chillies were individually wired & added to the arrangements during the installation.

All in all it was a fab event to work on & the Round House is an awesome venue, believe it or not was my first time of visiting & I can see why it is a popular venue that hosts an array of different events. Hopefully we will be back again soon although perhaps not with broccoli’s and chillies!

← Mint and Gold Wedding with Proteas and Floral Chandelier Vibrant Autumnal Flowers at The Bell in Ticehurst →
We use cookies on our website to give you the most relevant experience by remembering your preferences and repeat visits. By clicking “Accept All”, you consent to the use of ALL the cookies. However, you may visit "Cookie Settings" to provide a controlled consent.
Cookie SettingsAccept All
Manage consent