Relaxed Outside In Woodland Wedding in East Sussex 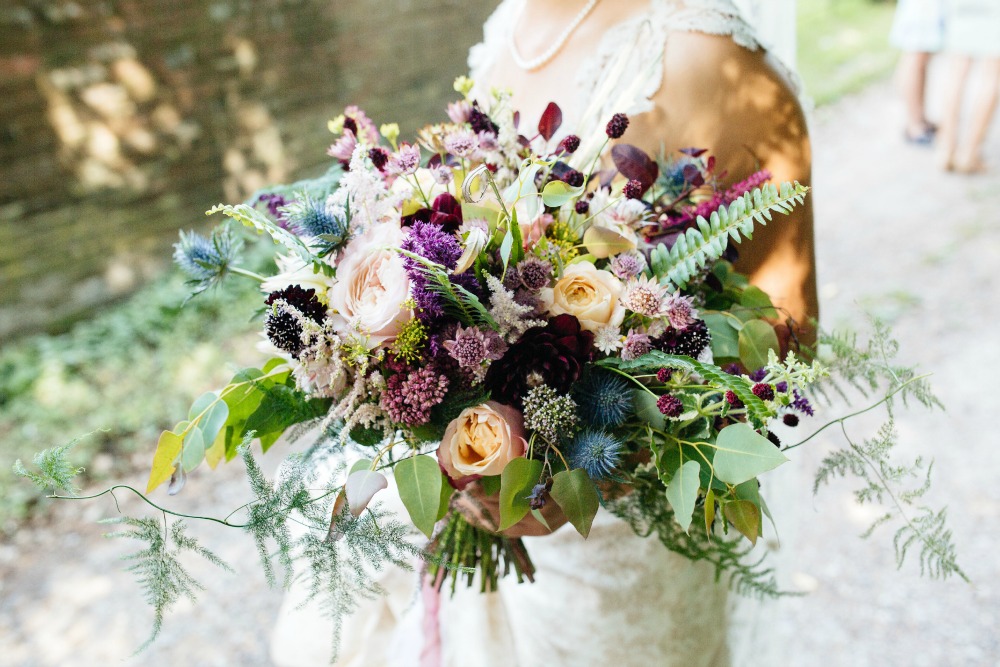 Today I am excited to share with you these gorgeous images from Hugh & Monica’s beautiful wedding back in July. It was a relaxed outside in woodland wedding in East Sussex. Monica and Hugh were such a creative pair, totally drawn to things that were a little different and unique when Monica also mentioned her love of foliage and texture too I knew we were in for a treat! I was not wrong either as we got to create a flower chandelier which hung above their dance floor in the marquee, needless to say it was pretty epic! With a mixed colour pallet made up of sultry tones in purples & burgundies with brighter hints of yellows paired with dusky pinks and deep blues paired with lashings of textures & foliages, it was a winning combination. Here’s a little more about their day from the bride herself…

Monica; “We wanted everything to feel comfortable and relaxed, but we also wanted to highlight just how festive a day this was for us, so we aimed to achieve this primarily through flowers, good food, and awesome music which was provided by the incredible Timorous Beasties, a London based ceilidh band.. The original inspiration (and if we’d had limitless funds, we’d have gone all out for this) was a kind of Belle-Époque-meets-hippie-60s style for the first half of the day. This was partly inspired by the dress, of course, which was a Claire Pettibone cotton dress with an antique-y print of pale brown roses. I don’t think that this melange is exactly what we ended up with–but things generally had a fun, homey, lovingly made and warm feel, mainly because so many friends & family chipped in to help with the food and decoration (including table flowers), and I was perfectly happy with that.”

Monica; “The venue (the groom’s parents’ home) was right next to the Ashdown Forest, so of course I wanted to incorporate the feel of that. If it had been possible, I would have had the whole ceremony right smack in the middle of the woods, but as that wasn’t possible, I wanted to make it seem like the Ashdown Forest had gone rampant and invaded our marquee. The superabundance of the flowers in particular made it feel like quite a magical space. I was so inspired by my conversations and brainstorming sessions with Joanne about the flowers that I went a bit crazy and overbought on flowers for the table decorations. Anyway–next time!” See it really is a tricky old game ordering & estimating flower quantities, you heard it from the horses mouth! The marque really did look enchanting though so I am sure it was worth buying the extra flowers 😉

To mark the entrance to the marquee we created wild woodland style arrangements in copper containers which were placed on whisky barrels either side of the main entrance, the twigs add the perfect finishing touch to these designs to give them that wild woodland edge.

In keeping with the bringing the outdoors in vibe we created a foliage backdrop which worked really effectively against the fabric of the marquee. Made up of a mixture of foliage; soft ruskus, asparagus fern and sharon fern with hanging glass succulent globes & just a few scattered flowers (less really is more in certain circumstances and this most certainly is one of them!).

This design would look superb as a wall paper print, don’t you think? I adore the blend of the different shapes and textures of the foliage and the subtle softness of the asparagus fern.

Monica; “A lot of guests told us that the other, Korean part of the ceremony–which in Korean is called the paebaek–was their favorite part of the whole day. Hugh and I changed into traditional Korean outfits (a hanbok, in the singular), which my mom had bought from Korea. Forest Row is luckily blessed with a very enterprising Korean lady named Sunhwa, who was kind enough to set up the Korean ‘stage’ for us. We were lucky enough to get a traditional gayageum player (she’s the one playing the instrument), which made the whole thing feel as authentic as could be expected for a Korean ceremony in the English countryside. We also had the main meal brought in from a Korean woman in London who single-handedly makes masses of Korean food for big events.”

The hanging chandelier captured so spectacularly by Naomi had a 1 metre diameter (pretty big!) and working out the mechanics and logistics was a bit of a head spinner but we got there & my was it worth it! I actually really love that it has got just a few flowers on it anymore and it would have taken away the wild woodland feel as the star of the show is the mix of foliages and hanging amaranthus (in my opinion 😉 ).

Thank you so much to Hugh and Monica for not only letting us work on such an awesome brief but contributing with today’s post too and to Naomi Goggin for the stunning images!

← Personal Post, Another Year Older Wedding Flowers, where to start? →
We use cookies on our website to give you the most relevant experience by remembering your preferences and repeat visits. By clicking “Accept All”, you consent to the use of ALL the cookies. However, you may visit "Cookie Settings" to provide a controlled consent.
Cookie SettingsAccept All
Manage consent